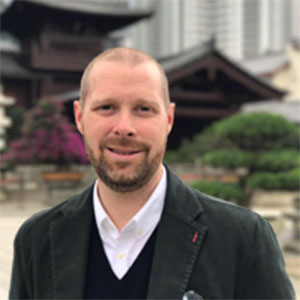 Michael has been an active part of the development and advocacy for study abroad programs at Duquesne University since his undergraduate years. Michael spent two years in Barcelona, Spain as a missionary/volunteer for his church between his Freshman and Sophomore year and then studied abroad twice during his junior year at the University of Seville in Spain and in a summer program in Costa Rica. After graduating from Duquesne, Michael pursued graduate studies in Spanish at St. Louis University's Madrid Campus in Spain. His international experiences have defined who he is today and his passion for his career in helping young Duquesne students to have these same transformative experiences.

Michael helped to establish Duquesne's flagship campus in Italy and has been the Director in Rome since the first year of the program (2001). He was also instrumental in the development and opening of the Duquesne in Dublin program in Ireland and has managed the Irish "campus" since its inception in 2013. More recently, he has helped to create, coordinate, and define new successful short-term Maymester programs in Europe and Africa, including Italy, Ireland, Ghana, and Tanzania for the Mary Pappert School of Music, the Bayer School of Natural and Environmental Sciences, the School of Nursing, and the Center for African Studies.

Michael is an active member of AACUPI (American Association of College and University Programs in Italy), NAFSA, EAIE, Forum on Education Abroad, the National Italian American Foundation, and is a Friend of the American Academy of Rome. Michael co-teaches the "Intercultural Awareness" cornerstone course at the Italian Campus. He is fluent in English, Spanish, and Italian and a dual citizen of the United States and Italy.